For the sages of ancient India, sex and romance were just the first few steps in a more expansive process of learning to love.

Hinduism has a beautiful myth about the origins of love. In the beginning, there was a superbeing called Purusha. This being was without desire, craving, fear, or indeed the impulse to do anything at all—since the universe was already perfect and complete.

As humans, we too are seeking unity, and love is the word we use for that search.

Then the creator Brahma took out his divine sword and split Purusha in two. Sky became separate from earth, darkness from light, life from death, male from female. Each of these set off passionately to reunite with its severed half.

As humans, we too are seeking unity, and love is the word we use for that search.

These days we tend to focus on the romantic and sexual elements of the process. The signs of this are everywhere: Millions of people use online dating sites each month in search of romantic partners. Advertisers exploit our love affair with love to sell everything from aftershave lotion to sports cars. And Hollywood jerks our heart strings with blockbuster romantic adventures.

A visitor from another planet might think that we earthlings—and Americans in particular—were obsessed with chasing love. If you asked the sages of ancient India, however, they’d probably say that love is not what we’re actually chasing. Instead, we pursue the intense but fleeting emotional high of “falling in love,” which generally doesn’t last very long.

So how do we keep the life-giving flame of love alive? The ancient thinkers of India, who devoted a great deal of attention to this problem, recognized and honored the power of sex and romance to jump-start our flagging emotions. But the important question for them was, where do we go from there? How do we harness the intoxicating power of falling in love to create a happiness that endures even after the initial flame dies away?

These philosophers began pondering this topic during Vedic times in the centuries before Christ and further developed their ideas during the great revival of bhakti yoga, or the path of divine love, in the 15th century and beyond.

They taught that love consists of a series of stages through which an individual can climb. The lower stages on love’s journey aren’t necessarily supposed to go away as one gets more enlightened—however, remaining stuck at the lowest rung can cause a lot of frustration and sadness.

The important thing is that we keep climbing love’s ladder. As the 19th century Hindu apostle to America, Swami Vivekananda, put it, “If one would expand, he must love, and when he ceases to love he dies.”

Here’s a look at the five stages of love as the Hindus see them:

At first, the desire to merge gets expressed through physical attraction, or kama. Technically speaking, kama means “craving for sense objects,” but it is usually translated as sexual desire.

Love consists of a series of stages through which an individual can climb.

But while the sages honor kama as a legitimate goal of life, they insist that we’ll never achieve wholeness through the act of sex alone.

Sex without true intimacy and sharing can leave us feeling empty. That is why the philosophers of India focused on the emotional content of the experience, and they developed an especially rich vocabulary to express the myriad moods and emotions associated with it.

Yet the ancients were realistic about what a mixed bag romance is. They did not imagine that finding our “soul mate” would solve our problems, relieve our sense of unworthiness and self-doubt, or satisfy all of our emotional needs.

Nevertheless, Indian philosophy teaches that romantic love, enjoyed in moderation, provides a foretaste of something even greater.

Illustration from the Gita Govinda by Jayadeva, entitled Foreplay of Krishna and Radha.
Photo courtesy of Jean-Pierre Dalbéra / Flickr.

To the millions of OK Cupid subscribers, India’s philosophers of love would probably say, “Stop waiting for love—it is within your power right now to make it happen!”

The way one does that, they would say, is by giving out love in little ways whenever you can. That could mean a smile at the checkout counter, a gift of food to the hungry, a soulful hug.…

“The simplest acts of kindness,” said Mahatma Gandhi, “are by far more powerful than a thousand heads bowing in prayer.”

“The river that flows in you,” says the Indian mystical poet Kabir, “also flows in me.”

Compassion resembles the uncomplicated love that we naturally feel toward children and pets. It is also associated with “matru-prema,” the Sanskrit term for motherly love, which is said to be love’s most giving and least selfish form. Maitri is like a mother’s tender love but expressed toward all living beings not just for one’s own biological child.

Compassion for strangers, however, does not always come naturally. So in Hindu and Buddhist practice, there are loving-kindness meditations in which practitioners develop the ability to wish others well. The idea is that compassion is like a muscle that can become stronger if we use it regularly.

While compassion is a wonderful quality, it is not quite the final word. Beyond interpersonal love, the Indian tradition envisioned an impersonal form in which our sympathies gradually expand to embrace the whole of creation.

As a bridge to this, the sages came up with a path called “bhakti yoga,” which can be translated as the cultivation of the self through the love of God. Luckily for those who aren’t conventionally religious, bhakti need not be focused on God in the usual sense. It can be directed toward whatever higher ideal speaks to us most powerfully, be that kindness, truth, or social justice.

Think of leaders like Nelson Mandela, Jane Goodall, the Dalai Lama, and countless others whose love for the world was as passionate and powerful as any romance.

Through bhakti one learns that one’s true family is the family of life itself.

Up until this point, each stage of love has been directed outward into the world. But at its apex it comes full circle back to the self. Atma-prema can be translated as “self-love.” This is not the self as we usually think of it, but the essential self, the self that exists at the center of all of us.

What this means in practice is that we see ourselves in others and see others in ourselves. “The river that flows in you,” says the Indian mystical poet Kabir, “also flows in me.”

When we achieve atma-prema, we recognize that—when stripped of the accidents of our genetic heritage and upbringing—we are all expressions of the one life, the life that the Indian creation myth represented as Purusha. The great Sufi visionary Rumi gave voice to this paradoxical experience:

I, you, he, she, we—
in the garden of mystic lovers,
these are not true distinctions.

Atma-prema arises from the realization that beyond our personal faults and foibles—beyond even our name and personal history—we are all children of the most high. When we love ourselves and others in this profound yet impersonal way, our love loses its boundaries and becomes unconditional.

Love itself will teach us

We don’t live on the summit of universal love. We climb the mountain, and then we descend it in order to share what we’ve found with others.

The sages of ancient India did not view the five stages on love’s journey as mutually exclusive. You do not need to renounce sex and romance in pursuit of a “higher” love. All the forms coexist in the heart that is mature.

By fully developing each of the five stages in turn, we can free ourselves of the addiction to romance as well as our narrow attachment to kith and kin, and become transformed into genuinely full-hearted people. 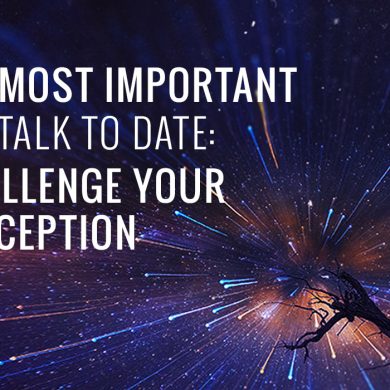 THE MOST IMPORTANT TED TALK TO DATE: CHALLENGE YOUR PERCEPTION