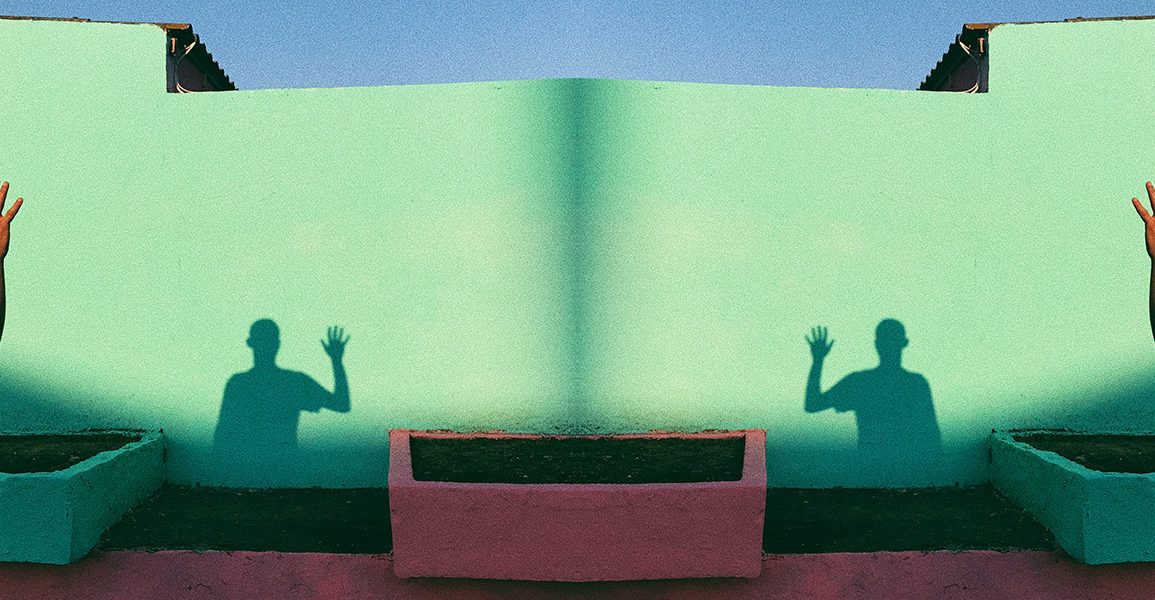 Non-duality teacher Rupert Spira argues that all psychological suffering and worldly conflict is based upon a single presumption alone. The presumption of duality. The belief that you are a separate self. Someone that experiences and interacts with a world outside of your self.

If you’re unfamiliar with non-duality concepts then this may read like a string of paradoxical new-age platitudes. A scientific approach of pausing, testing and observing your direct experience as you read is the key here.

Let us start with our self.

What can we say for certain about ‘I,’ our self, the subject, the one that knows experience? The first thing is that I am obviously present – I am. If I were not present I wouldn’t be aware of these words. And the second self-evident fact about our self is that I am aware or knowing. If this were not true I would not be aware of thoughts, sensations or perceptions.

In other words, I am and the ‘I’ that I am, is aware that I am. This knowing of our own being – its knowing of itself – is the most familiar, intimate and obvious fact of experience and is shared by all.

This present and aware ‘I’ is sometimes referred to as ‘Awareness’, which means the ‘presence of that which is aware’. It is a word in which the two fundamental qualities of our self – being and knowing – are recognized as one.

What else can we know for certain from experience about our self? ‘I’ am aware of thoughts, sensations and perceptions but am not made out of a thought, sensation or perception. ‘I’ am made out of pure being and knowing.

As such ‘I’ could be likened to an open, empty space to which or in which the objects of the mind, body and world (thoughts, sensations and perceptions) appear. And just as empty space, relatively speaking, cannot resist or be agitated by the appearance or activity of any object within it, so the open, empty space of Awareness cannot resist or be disturbed by any appearance of the mind, body or world, irrespective of their particular quality or condition. This inherent absence of resistance is the experience of happiness; this imperturbability is peace. This happiness and peace are not dependent upon the condition of the mind, body or world and are present in and as the essential nature of Awareness under all conditions and in all circumstances.

Thus happiness and peace, as well as being and knowing, are essential to our true nature.

The Birth and Death of the Separate Self

And with the apparent veiling of our true nature, the peace and happiness that are the natural condition of all experience seem also to be veiled. It is for this reason that there is always a deep pain in the heart of the separate self – the pain of separate existence. Most people’s lives are spent trying to ease or numb the pain of this separation through substances, objects, activities and relationships.

The longing of the separate self is like a moth that seeks a flame. The flame is all that the moth desires and the one thing it cannot have. As the moth touches the flame it dies. That is the moth’s way of experiencing the flame – by dying in it. And that is the separate self’s way of experiencing peace, happiness and love – by dissolving or dying.

However, as we have seen, the separate self is only a real self from its own illusory point of view. How can an illusion die if it is not real to begin with? It cannot! It can only be seen to be utterly non-existent.

If the separate self were real it would be impossible to get rid of it because that which is real cannot disappear. And fortunately, that which is unreal, such as a separate self, object, other or world, never truly comes into existence.

Therefore, no activity or cessation of the mind’s activity can bring about this understanding. All that is required is to have the courage, honesty and love to look, to see clearly, and to live the implications of what we discover.

The true and only self of Awareness has no knowledge of any limit or destiny within itself. It knows that it is infinite and eternal. It is only thoughts and feelings that say otherwise. A deep exploration of these thoughts and feelings will reveal that they do not reflect the true nature of our experience.

When our self is relieved of the beliefs and feelings of lack and limitation with which it has been apparently veiled, it stands revealed as the true and only self of ever-present and unlimited Awareness.

Let us explore the other side of the fundamental presumption of our culture – the independently existing outside object, other or world.

This is the startling but simple fact of experience that our culture has not yet faced: matter, the dead inert stuff out of which the independently existing universe is supposed to be made, has never been found. Matter is a concept, a valuable concept that is useful as a working model in some situations, but nevertheless a concept. It has never been found. Nor will it ever be found for whatever is found is, by definition, never known independently of Awareness.

In fact, even the model of thoughts, sensations and perceptions appearing inAwareness does not stand up to the scrutiny of experience. It is a half way stage that dissolves the belief in the independent reality of matter and mind and establishes the presence and the primacy of Awareness. But once this has been established, not philosophically but in our actual experience, this model too has to be abandoned in favor of one that more accurately reflects the reality of experience.

And all that is known of thinking, sensing, seeing, hearing, touching, tasting and smelling is the knowing of them. And what is it that knows this knowing? Only something that itself has the capacity to know could know anything. So it is knowing that knows knowing.

All that is ever known is pure knowing, knowing and being itself. And that knowing is your self. All that is known is Awareness knowing itself, the self knowing the self.

There is only your self – not a self that belongs to any object or person because there are no objects or people as such to which it could belong. This knowing belongs to itself alone. It is itself and knows itself alone. There are no others or objects there, no inside self or outside world.

And what is the name we commonly give to this absence of otherness, distance, separation and objectness? It is beauty or love.

The revelation of our true nature as it is puts an end to one chapter of our life, the chapter in which we believe ourselves to be separate selves born into a world, moving, changing, growing old and destined for death. But it is only the beginning of another chapter.

The next chapter is the realization of this understanding in all realms of our life, not just the way we think, but the way we feel, sense, perceive, act and relate. It is a never-ending process in which every aspect of experience is gradually permeated by the peace of our true nature.

In ignorance – when the true nature of our experience is ignored – our self, Awareness, seems to take on the intermittent, limited qualities of the mind, body and world. It seems to become something.

In understanding our self, Awareness, is realized to be the open, empty field of experience, not made of a thing but knowing all seeming things. As such it isnothing – not a thing.

In love, the mind, body and world gradually take on the qualities of Awareness – they become open, empty, transparent, pervaded and saturated by the peace and happiness that are our true nature. As such our self, the open, empty no-thingness of Awareness is realized in our experience as the reality or substance of everything.

True knowledge is the experiential understanding that there is only ever-present, unlimited Awareness or Knowing. Nothing other than this is ever known even when it seems that a mind, body and world are known. This ever-present, unlimited Awareness, which is simply the intimacy of our own being, is the fundamental nature of the apparently inside self and its corollary, the apparently outside object, other or world.

All religions are founded upon this understanding. In Christianity it is expressed as, “I and my Father are one.” That is, I, Awareness, and the ultimate reality of the universe are one and the same reality. In Buddhism, “Nirvana and Samsara are identical.” That is, the transparent, open, empty light of Awareness which is not made out of any kind of a thing – nothing – is the substance of all appearances – everything. Nothing taking the shape of everything. In Hinduism, “Atman and Param-Atman are one.” That is, the individual self, when divested of superimposed beliefs and feelings of limitation, stands revealed as the true and only self of eternal, infinite Awareness. And in Sufism, “Wherever the eye falls, there is the face of God.” All that is seen is God’s face and it is God that sees it.

All these phrases are conditioned by the culture in which they appeared but they all point towards the same unconditional truth – the reality of all experience.

This revelation of understanding and love strikes at the heart of the fundamental presumption upon which our world culture is founded, the presumption of duality – I, the separate inside self, and you or it, the separate outside object, other or world. All conflicts within ourselves and between individuals, communities and nations are based upon this presumption alone and all psychological suffering proceeds from it.

Any approach to these conflicts that does not go to the heart of the matter will postpone but not solve the problem of conflict and suffering. Sooner or later as individuals and as a culture we have to have the courage, the humility, the honesty and the love to face this fact.

The highest purpose of all art, philosophy, religion and science is to reveal this truth in an experiential manner although all these disciplines have temporarily forgotten this in our culture. However, it may not be long. As the painter Paul Cezanne said, “A time is coming when a single carrot, freshly observed, will trigger a revolution”.

This is the only true revolution, the revolution in which our view of reality is turned upside down. Awareness – pure Knowing – is not just the witness of experience. It is its substance, its very nature. Everything changes when we begin to live from this point of view. We realize that what we have always longed for in life was present all along in the depths of our own being. It is always available, never truly veiled. To begin with it is often felt as peace in the background of experience but it cannot be contained and before long it begins to flow out into the world as joy, freedom, love and creativity.

To learn more about Non-Duality and explore these concepts more experientially please check out Rupert Spira’s YouTube page and his guided yoga meditations.