Back in 1991, scientists were amazed when they made the discovery…

In the eerie environment inside the abandoned Chernobyl Nuclear Power Plant, researchers remotely piloting robots spotted pitch black fungi growing on the walls of the decimated No. 4 nuclear reactor and even apparently breaking down radioactive graphite from the core itself. What’s more, the fungi seemed to be growing towards sources of radiation, as if the microbes were attracted to them!

More than a decade later, University of Saskatchewan Professor Ekaterina Dadachova (then at the Albert Einstein College of Medicine in New York) and her colleagues acquired some of the fungi and found that they grew faster in the presence of radiation compared to other fungi. The three species tested, Cladosporium sphaerospermum, Cryptococcus neoformans and Wangiella dermatitidis, all had large amounts of the pigment melanin, which is found – among many places – in the skin of humans. People with a darker skin tone have much more of it. Melanin is known to absorb light and dissipate ultraviolet radiation, but in the fungi, it seemed to also be absorbing radiation and converting it into chemical energy for growth, perhaps in a similar fashion to how plants utilize the green pigment chlorophyll to attain energy from photosynthesis.

“So the fungi that grow in there are radiotrophic fungi, that are rich in melanin. Melanin absorbs radiation and converts it into other forms of energy (including electric). It acts as a radiation protectant in our skin, but is also present throughout our nervous system, including our eyes (in the retina), our ears, and in the substantia nigra in our brains.

To learn more about Chernobyl’s radiation-loving fungi, Jet Propulsion Laboratory researchers sent eight species collected from the area to the International Space Station (ISS) back in 2016, seeking to observe how the organisms would react. The ISS environment exposes inhabitants to between 40 and 80 times more radiation than on Earth. Researchers behind the effort hoped that the fungi would produce molecules that could be adapted into drugs that could be given to astronauts to protect them from radiation on long-term missions. Results of the experiment have yet to be published.

Back on Earth, Dadachova noted in a 2008 paper that Chernobyl’s radiation-loving fungi are almost certainly not the first examples of their kind.

“Large quantities of highly melanized fungal spores have been found in early Cretaceous period deposits when many species of animals and plants died out. This period coincides with Earth’s crossing the “magnetic zero” resulting in the loss of its “shield” against cosmic radiation.”

This raises an intriguing possibility – perhaps there are places in the cosmos where melanin-containing organisms thrive in environments awash in radiation? Wherever there is energy to be harvested, life might just find a way… 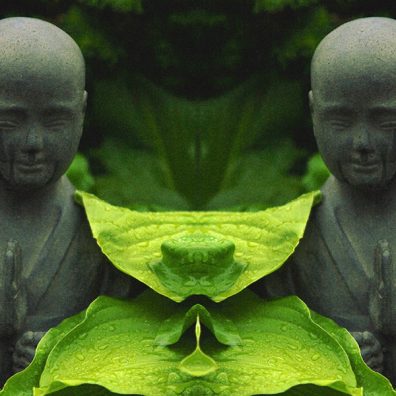 4 Powerful Mantras to Anchor you into Presence