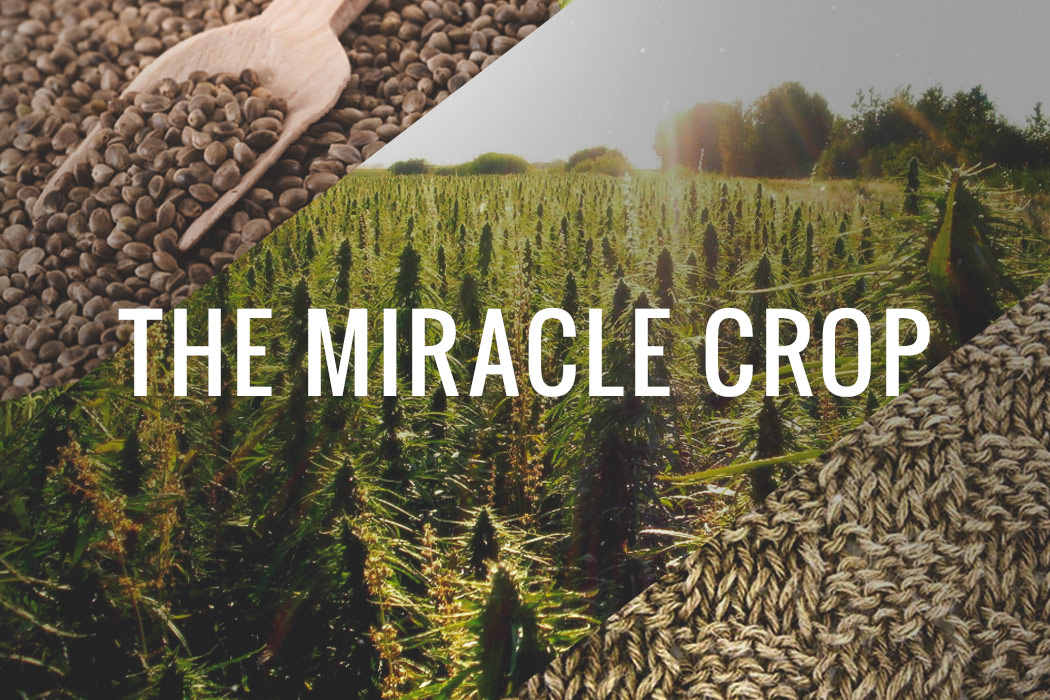 Hemp: A Suppressed Miracle Crop that could save the planet?

Did you know there is an infinite resource that can directly replace plastic, oil, paper, cotton, building materials. It was cultivated for industrial purposes in the past for over 12,000 years, however it is currently classified in the US as a schedule 1 controlled substance drug. It’s not psychoactive Marijuana, it’s the non psychoactive strain with virtually no THC in it (the active ingredient in cannabis) and it’s called hemp, which conversely doesn’t even fit under the dictionary’s definition of ‘drug’. So, why is this crop being suppressed? Lets look into it’s history.

“Why use up the forests which were centuries in the making and the mines which required ages to lay down, if we can get the equivalent of forest and mineral products in the annual growth of the hemp fields?” – Henry Ford

On the contrary, Americans were legally bound to grow hemp during the Colonial Era and Early Republic. The federal government then subsidised hemp during the Second World War where US farmers grew around a million acres of hemp as part of the national program Hemp for Victory.

Many of the founding fathers of the US including George Washington, John Adams and Thomas Jefferson all grew hemp crops on their own land and even the original declaration of independence was drafted on hemp paper. Christopher Columbus’s ship was fully rigged with hemp, even the boat’s sails were made from it.

Hemp was almost completely phased out of existence in 1970 after being labelled a threat so dangerous that it was forcibly being wiped out. Though imposing no danger through human consumption the only danger it possessed was it’s clear ability to wipe out of existence the monopoly of resources it’s directly superior too. Paper, fuel, cotton, plastic and building materials. Clasping onto the trails of international propaganda we still negatively associate it with Cannabis, but one quick browse of the congressional research paper on industrial hemp clears things up, it quotes “although marijuana is also a variety of cannabis it is genetically distinct from industrial hemp and is further distinguished by it’s use and chemical makeup”.  Even if you smoked an entire garbage bag of hemp you would not get high. It is not dangerous to people it is a danger to corporations.

SO HOW IS IT A MIRACLE CROP?

It sounds far fetched but, after researching heavily in the process of collating and writing this article, hemp does indeed hold solutions to many of the world’s biggest issues. It can change the world today and here’s five major ways it can do that: 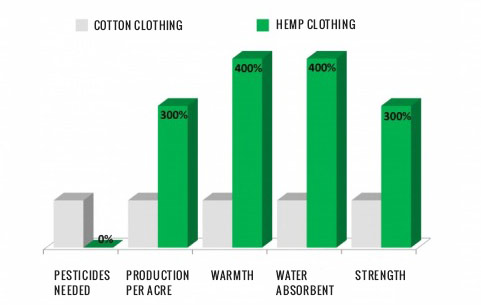 Hemp clothing is far more durable than cotton, which is an industry still operating a form of slavery from cultivation to production. GMO cotton has led to indentured servitude for Indian farmers where failed crops and debt result in shockingly high suicide rates. The beauty of hemp is that unlike cotton it requires no pesticides to grow. In fact, it requires no chemicals in it’s growth cycle whatsoever and just one acre of hemp will produce as much material as 2-3 acres of cotton. Hemp is four times warmer than cotton material and the fibre is longer, stronger, more absorbent and more insulating than cotton fibre. To grow cotton you require about 1,400 gallons of water for every pound you intend to produce. With hemp you require only half the amount of water. Cotton is simply inferior in every aspect. Read more about hemp vs cotton on slate here

“I don’t know if Hemp’s gonna save the world, but I’ll tell you this… it’s the only thing that can” – Jack Herer

Henry Ford’s car design was originally created almost entirely out of hemp. The frame was 14x lighter than steel and 10x stronger than steel and it even ran on Hemp oil but we’ll elaborate on the fuel side later. Hemp is unbelievably versatile with the potential to be made into various different building materials, hempcrete, fibreboard, carpet, stucco, cement blocks, insulation, and plastic. Walls made from hemp are naturally rot free, pest free, mould free and fire resistant as well as lasting up to 500 years.

Hemp plastic is a bioplastic made using industrial hemp. It’s 100% recyclable and can be manufactured to be 100% biodegradable indefinitely holding the key to completely replacing unsustainable oil based plastic materials that are bulging at our destructive land fills. The plastic we are using today contains large amounts of dangerous chemicals such as the controversial Bisphenol A. If all our plastics were made from hemp material you could literally purchase something that came in a plastic hemp container and then throw that container directly into the compost.

There is no need to keep cutting down millions of trees for paper production. Hemp grows in 12 week cycles versus the 20+ years for trees to mature. Hemp produces four times as much pulp per acre than timber on a sustainable basis, and can be used for every quality of paper. Hemp takes 4x the amount of carbon dioxide out of the air compared to trees, just think on an industrial scale what this could do to reduce CO2 in our atmosphere. 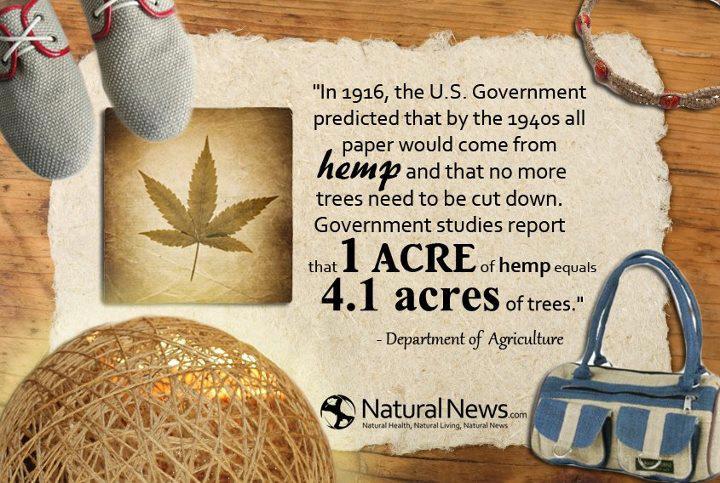 Furthermore, no chemicals are needed to turn the hemp into paper and yet it can still be recycled several times versus standard white pulp being recycled 3 times. Not to mention that 220 million pounds of toxic pollution are added into the air and water every year during the production of wood paper and pulp. Hemp paper does not need to be bleached with chlorine; it can be whitened with hydrogen peroxide, which is a lot safer for the water and soil of the earth. The list goes on but again it’s clear that hemp is the far superior choice, everyday we ignore this we plunge deeper into unsustainable rates of deforestation. 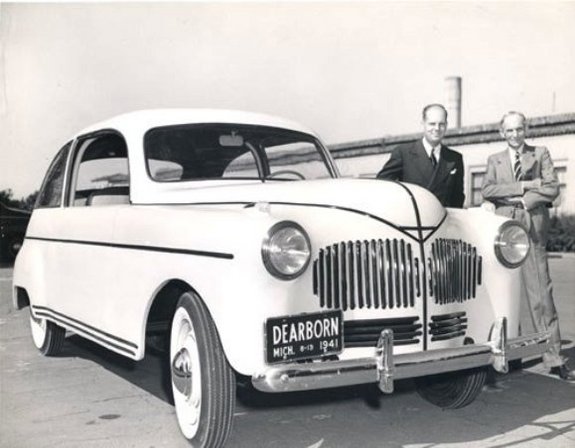 Hemp has the advantages of being turned into biofuel in two ways: the oil from the pressed hempseed can be turned into biodiesel, or the fermented stalk can be made into methanol and ethanol. The biodiesel is completely biodegradable and burns without creating sulfur dioxide, resulting in nearly 50 percent less emissions than that measured for diesel fuel. Although clearly hemp is not the greatest alternative to fuel that is available, biofuel is merely a bi-product of this crop, not it’s main use and both of the natural alternatives here are completely non-toxic so undeniably, they are well worth further consideration and research.

Hemp seeds contain all the essential amino acids and essential fatty acids necessary to maintain healthy human life. No other single plant source has the essential amino acids in such an easily digestible form, nor has the essential fatty acids in as perfect a ratio to meet human nutritional needs. They are one of the most nutritious seeds on the planet. Along with magnesium, potassium, dietary fibre and almost every vitamin and mineral that the body needs, Hemp seeds contain high amounts of essential omega 3 and 6 fatty acids. Hemp seeds are very high in protein, containing 25% protein content. They do not contain phytic acid, which means every last bit of goodness that these tiny seeds have to offer can be absorbed and utilised by the body.

If grown extensively, its diverse uses can be of significant value to the environment, the economy, world hunger, personal health, and so much more. It is estimated that methane and methanol production alone from hemp grown as biomass could replace 90% of the world’s energy needs. For the environment, hemp can reduce deforestation, pesticide use, provide a sustainable biofuel, and replace GMO cotton among many other benefits.

Trust your own rational intelligence and creativity here. The practical applications for this plant are limitless. We can stop cutting down all the trees used for making paper, reduce extraction and consumption of petroleum that we continue to spill into the oceans, we can stop stuffing the earth full of chemical and oil filled plastics. None of these limited, dirty and expensive forms of energy sources need be relied on anymore.

So why is it’s growth still prohibited across much of the world? The most probable reason I can see, is that it’s suppression is purely enforced to protect the corporations that control the monopoly of resources it’s directly superior too. These corporations are continuously responsible for poisoning the planet and destroying the Planet’s forests in the name of profit. Making hemp illegal because it looks like marijuana is the equivalent of making powdered sugar illegal because it looks like cocaine no? The choice and decision is ours to make and implement, we are collectively responsible, we just need to raise awareness of this perfectly designed crop, it’s there for a reason.

“Locate the blind spot in the culture–the place where the culture isn’t looking, because it dare not–because if it were to look there, its previous values would dissolve.” – Terence McKenna 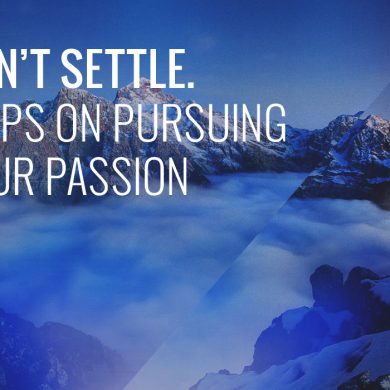