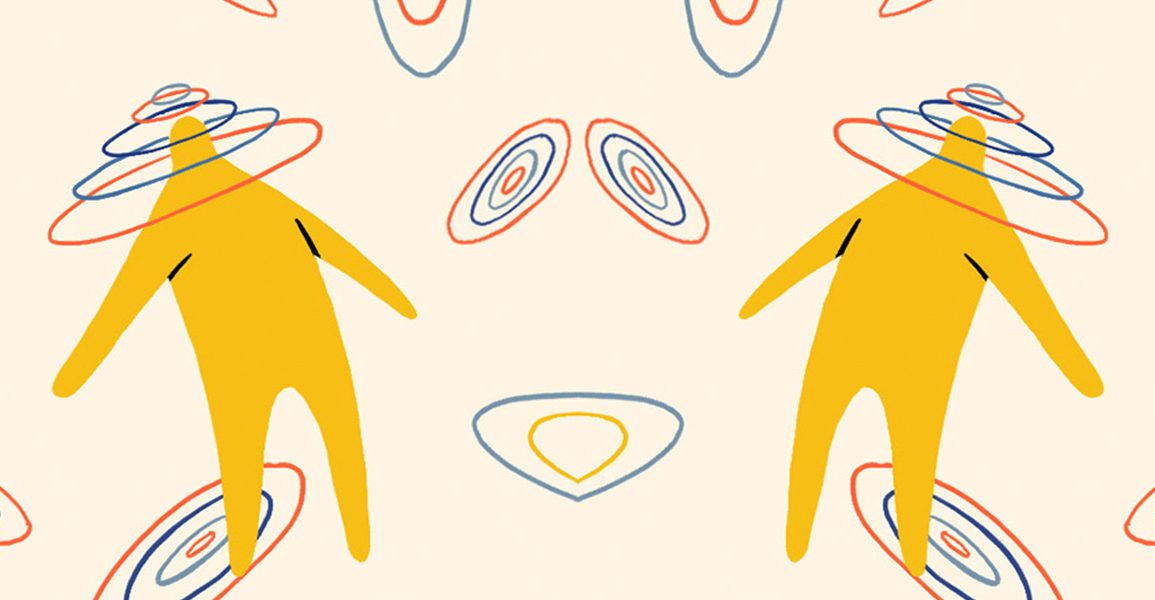 The Human Task: Active Participation in The Evolution of Consciousness

In brief this article explores the human requirement for collaboration in the evolution of consciousness.

It is the long history of humankind (and animal kind, too) those who learned to collaborate and improvise most effectively have prevailed. — Charles Darwin

There is no problem that looms as large as one’s own problem, be it even a minor one. So when things get rough it is sometimes helpful to get back to basics to put everything back into perspective. To get back to basics one has to ask the bigger questions and try to see a greater purpose than those of the systems that constrain us in our everyday lives.

In the end we are are all figments of our own imagination. We imagine our own realities, and this is mine at the moment.

It is hard to always honour the intention, but recently I have been trying to remember to consider a more philosophical viewpoint as I proceed: that which most of us at this time perceive as most concrete is only spindrift in the winds of time.

I have been trying to remember that the constant is not the material, but consciousness.

I believe that, in its most fundamental form, consciousness accedes to only one law: it is drawn towards potential. All the patterns we observe, and those we will observe, are simply a reflection of the potential that is bound by consciousness as it draws towards itself. Indeed the very matrix in which we exist: the Solar system and the planets, even as they were forming, were a result of consciousness drawing towards potential. Optimists call this the Logos (the principle of divine reason and creative order). We glimpse this from time to time and call it the divine plan or something similar, and see ourselves as a tiny part of a roller-coaster ride over which we have no control. Yet we are the very essence of that divinity: the point of the present expression of consciousness as it evolves within the human matrix.

So, I try to remember that at the core is consciousness. This is what we are the current most sublime expression of. It is unfortunate that we cannot just know this, and be imbued with the knowledge, without having to discover it first. Imagine a world where our motivating influences flowed from this simple knowledge: our primary effort would be to perfectly integrate advances to best facilitate the expression and evolution of consciousness.

The coarse sledgehammer science, and the philosophy of logic of our age, in all its pride and materialism is so easily perverted to misuse and error and, though we yearn for truth, we continuously seem to mistake knowledge for wisdom. The universe pulses to certain frequencies and the tides of influence come and go, sometimes in crisis and sometimes in harmony. Within our human experience we inevitably perceive our own time as a time of risk and urgency for the Logos, but in reality it is our own task of evolving consciousness within the human orbit that concerns us and stimulates us to effort. Perhaps it is a time of crisis within the human realm of the Logos, but then it must also be a time of great energy and excitement. We are human, and we bend to a task which harries us.

Imagine the possibilities for a species attuned to the Logos, a beautiful artistic refined civilisation, growing and spreading, without greed or waste or pollution or ugliness or excess around the globe, with subtle technologies flowing from evolving consciousness to the purpose of evolving consciousness, technologies which we may never develop in our brutal time, in place for the express purpose of refining the human mind…, and social structures formed around the love of communication and the excitement of expanding the boundaries of the mind…, a society based on collaboration rather than competition…, a species impelled by true purpose.

So what is true purpose? If we can accept that everything exists in the spirit first, and in this form is at its most binding, most immutable, then all potential flows from this ultimate reality to the more transient states of energy and matter as we perceive and manipulate them. If we then realise that the spirit is, consciousness, and that our minds are a current expression of just that, and we hold central, to any task, the knowledge that we exist only to enable consciousness to draw toward its own potential, then we are working, in any field, toward true purpose. Yes, we are able to exercise personal choice, but imagine if more choices were deliberated upon from the perspective of the task: evolving consciousness to enable it to move toward potential.

One could argue that to serve the Logos is the ultimate selfish act, for in so doing one is serving consciousness, the very mind that defines our most immutable aspect.

But the mind-logos is never in error. Rapid evolution, as we know it, through fits and starts, is chaotic.

Any evolution occurs in jumps and plateaus. In a perfect universe, where all energy and matter were evenly distributed by the big bang in a perfect expanding sphere, where every iota was evenly spaced and moving ever outward at an even velocity, there would be no potential at all for consciousness. It is the imperfections that we see in the universe around us: the galaxies, gas nebula, solar systems, the stars and planets: these visible, tangible, chaotic, anomalies in our universe, that are the very ground in which consciousness can exist. The errors in the totality are the seats of awareness – if awareness is to be anything more complex than the simple unconscious beating of a universal heart. Inevitably though, where there is error and imperfection, there is also going to be trouble and strife. All things struggle for equilibrium…, gravitational fields find accommodations with velocities of celestial bodies, radiation is moderated by atmospheric gasses, organisms form opposing dynamics and symbiotic partnerships, energy and excitement ensue, and consciousness prepares the ground that will host the almost limitlessly varying aspects of its mind…, but, as we now know, perfection is not the optimum state for the expression of consciousness. The mind needs stimulus. Life is generated before perfect equilibrium is attained, and chaos and uncertainty foster the evolution of the hosts of separate awareness.

There is no great plan as such; not that I have ever been able to discern; just an inexorable pull, like gravity, drawing us all in small steps toward potential. Where we fit in at any given moment is really up to each one of us. In an ideal world where people were mindful of the task (evolving consciousness) we would all be guided and enabled by our unique talents to live in society as collaborators rather than competitors.

To survive in turbulent times requires an ability to adapt, physically, psychologically and sociologically. A short life-cycle, even in complex organisms, enables fast responses to environmental and sociological change. As the human mind expands, with the stimulus of sophistication and the imperative of thought, and shared thought, we imbue the task with an ever increasing sense of urgency, and find ourselves fraught with such levels of stress and trauma, the companions of rapid change, that one feels nothing less than awe at our willingness to shoulder the load. We are being tempered and honed by the Logos for the task. To adapt and survive though is not enough. If we are to continue as a species the Logos must be served, for if we are not able to continue to be a viable medium within which expression of consciousness can evolve then consciousness will find another way to express itself.

So, beyond academic pondering on the nature of the task, how do we serve the logos in a practical way?

Consider the difference between collaborators and competitors. Consider the difference between: survival of the fittest (the most ruthless), and growth through communication (survival through intimacy). Compare a shark to an elephant or a dolphin. The shark, a necessary part of the ecosystem that accommodates us, is a self sufficient species that has not needed to evolve much physically or socially in millions of years. It has limited potential for furthering abstract awareness. An elephant though, within an intimate family structure with complex social interaction, has more variety in its experience of consciousness beyond instinct. The elephant or the dolphin communicate and collaborate within their social units. The shark may communicate in a rudimentary way, but it does not work much in concert…, and this is why, in human society, the elephants are so important, for it is the elephants who evolve through communication rather than through competition. It is the elephants who can best serve consciousness. The elephants among us need to rally together in strength of numbers, to collaborate, to communicate, to open our hearts and minds with courage and confidence, to evolve a sophisticated, self aware philosophical society through the only means possible: communication.

Survival of the fittest produces predators: necessary in the natural world, but growth through collaboration and sharing allows far more potential for subtlety and variation in consciousness.

The establishment of an elite feudal society, with already decadent predators at its apex, who embody all the worst that is man, and little of the best: selfish, cruel, ruthless lords, revelling in their power, who see their fellow humans as little more than a resource, just as they do the planet in general, who will allow no random change to challenge their status quo: this is what the institutional powers that be would prefer. Not good ground for social evolution, especially at this time. Survival of the fittest produces predators: necessary in the natural world, but growth through collaboration and sharing allows far more potential for subtlety and variation in consciousness. Retrograde societies stifle communication. The logos needs fertile ground. If we lose our moral authority to the predators who would control and dominate us it could well spell the end of the human experiment.

The sharks in our society, though they may never know it, for they are stimulated by instinct to survive and to succeed at the most short term and least permanent level, that of the material, owe the continued existence of their very souls to those of us who are able to put aside our primordial survival instinct in favour of intimate collaborative relationships within the brotherhood of the Logos.

So we ask ourselves, “What can we do to give meaning to our existence, to assuage the fear of our mortality, to find a sense of destiny, to experience joy in the moment that continues to suffuse our lives in a lasting way that shopping does not, to serve the planet in a way that gives hope to the future?” The answer: go forth and communicate, without fear of judgement or ridicule. Compose an aria, write a poem, dance, paint a picture, log on to your favourite forum and exchange philosophies, and enjoy the expressions of those who are doing the same, but most of all…, converse, listen and speak, and if you can find some meaning or truth in the dialogue so much the better. The intimacy of communication is the greatest gift that can be bestowed, and the only way that anyone can serve the Logos. It is the gift that everyone can give.

Within the evolution of the Logos the journey is the destination.