The other day my friend noticed aloud that she probably knows my face a lot better than I do. I suppose it’s true—I only see it a few minutes a day in the mirror, or occasionally in a photograph. But she sees it almost every time either of us says anything to each other.

Of course, I’ve been seeing my face my whole life, much longer than any of my friends have been around. But our faces are constantly changing, and we only see them in certain contexts: primping, shaving, examining blemishes, checking for cars behind us. A person’s direct experience of their own face is surprisingly limited.

Yet, if you’re like me, you think you see your face all day long. Somehow, I feel like I know what mine looks like at nearly every instant. It seems like I can actually see it when I’m conversing with someone, or when I’m sitting at a computer typing, even though I’m not sure I’ve ever actually seen myself doing those things.

It’s a strange hallucination, this impression that I’m always seeing my face. I’ve tested it by making a face and then checking it in a mirror against what I think it looks like, and it’s always wrong. Try it yourself.

Our faces seem like an essential part of who we experience ourselves to be, yet they’re much more familiar to the people who know us than to ourselves.

And we see our own faces much more often than most of history’s human beings. With the exception of the last two hundred years, there were no cameras, and few households had mirrors. Unless you were a debutante, or had Narcissus’s habit of gazing into a ponds and rain barrels, it’s hard to see how your face would become a big part of your experience.

As central to our lives as we think our faces are, you live your whole life at exactly the wrong angle to see it. You are perpetually looking outward, in the same direction your face points, so it takes some kind of light-bending trick in order to even know what it looks like. And on those surprisingly infrequent moments when you do see it, the image is always at some distance, out in the world, on an electronic screen in your hands, or beyond the bathroom wall—never in the one place it supposedly lives.

It so happens that our world is, relatively suddenly, filled with devices that bend and reproduce light in exactly this way. We carry supercomputers in our pockets that display or capture our face at any time. We can beam the image to someone else, or even everyone else. Even our largest buildings are often sheathed in mirrors.

We’ve probably become hundreds of times more face-conscious than the vast majority of human beings ever were, and it’s hard to believe this isn’t warping us at least a little bit.

Even though we’re always looking outward, we tend to picture ourselves as others see us: from a short distance away, as a finite object in the world, rather than the subject that is experiencing the world. Even when you look in a mirror, it’s easy to forget that you’re seeing that mirror, and the image in it, from a first person viewpoint. You are always on the near side of the mirror. In fact, you are always on the near side of every object. Your eyebrows and nose are always just blurs in front of your window onto the world.

Through that window’s view, all sorts of things pass: your friends’ faces, your computer screen, the highway beneath you, the receiving line at your wedding, the ceiling of a hospital ward, bad TV shows, and occasionally, your imperfect little face in a mirror or photograph. We call this window-and-passing-things arrangement life.

The window is always clear and empty, and you are always looking out of it. There is never a face there, not for you anyway. Faces are always somewhere else, even though we are incessantly hallucinating the sight of our own face as we speak and act.

A so-called “face-to-face” conversation might be the easiest place to notice that this arrangement is actually our reality. When you think of a having a conversation over coffee with a friend, you might think of it as though this is what’s happening: 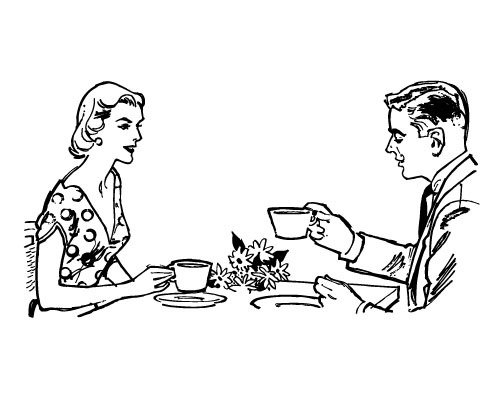 But in reality, all of your face-to-face conversations have only featured one face: the other person’s. A one-on-one conversation, when you really look at it rather than conceptualize it, is like this: 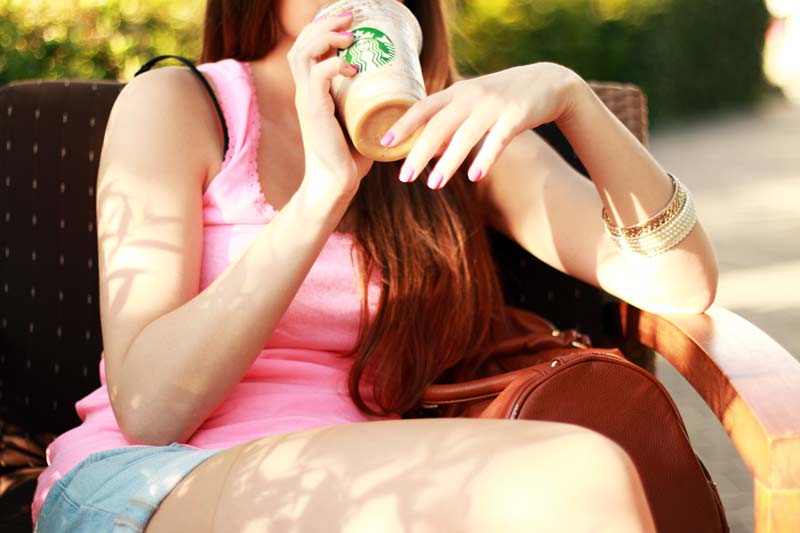 On your end is not a face, but a space. It’s an empty, borderless window that hosts your friend’s face, as well as her fries and coleslaw, the diner’s vinyl booth, the stripes of sunlight on the table, and—not to be dramatic—all of creation.

We think we experience our own face where others see it. But where they find a head and face, we find an empty window. Stubbornly, we identify with the object (an “eight inch meatball” as Douglas Harding often put it)—the biological hardware that we understand is doing the seeing—rather than the subject, the capacity for seeing itself, which is plain as day when you look.

I won’t belabor this point, like I have several times before. Re-examining your identity in this way is a real paradigm shift, and going on about it does no good except to prompt interested people to investigate for themselves. (And if you are interested, spend some time experimenting on headless.org, a site devoted to Harding’s ideas, with an open mind.)

But I will say that when you start treating face-to-face conversations as face-to-no­-face conversations, they seem to become much healthier and more natural, like you’re finally putting the peg in the proper hole. There’s something that works incredibly well about “hosting” your friend in your window. There’s no room for competition or bickering, because your world is wide open for them. “What an enormous difference it makes to a relationship,” Harding says. “The fear goes out of it, the embarrassment goes out of it, and the fun comes into it.”

Recognizing this face-to-no-face nature of one-on-one conversation creates a kind of uncanny easygoingness between the parties, because confrontation is impossible when only one of you has a face. You don’t get anxious about forgetting what you were going to say, worried about how you’re representing yourself, or managing anything else outside the moment, the way we so often do when we’re talking to each other. It becomes a true collaboration.

Before he died, Harding used to encourage this discovery by having two people look at each other through a tube made from a paper grocery bag. He asked them to throw out their preconceptions and notice the obvious differences between the two ends of the bag. Face there, space here. Complexity there, clarity here. Object there, subject here.

“It takes an enormous amount of energy to creep into a meatball,” he wrote in Face to No-Face. “That’s why we get so tired. I’ve got to put on a different face for you, and for him, and for her, and there’s no energy left for enjoyment of the world, for yourself, for who you really, really are.”

When I chat with my friend, and I’m lucky enough to remember, I give up my face, and find hers at the center of my world. Douglas frequently said “We are built for loving”, and that’s what he meant.