Alan Watts was not only an extraordinary thinker, but a jester as well. He possessed an uncanny ability to articulate answers to the big questions of life in a way that proved easy for anyone to grasp. He wrote more than 25 books in his lifetime, performed lectures as a “philosophical entertainer,” and played a major role in bringing Eastern Philosophy to the West. You need only to search his name on Google or Youtube to see the remarkable influence he had.

In the book “The Collected Letters of Alan Watts“, we are offered an entrance to his personal life and correspondence with revered figures such as: C. G. Jung, Henry Miller, Aldous Huxley, Timothy Leary and Joseph Campbell.

We have hand-picked 2 of these fascinating letters to share with you, delving into some of the big questions explored in his lifetime – “Why are we here?” and “What is the meaning of our existence?”

The first letter is probably addressed to a fan and addresses a problem the fan wrote to Alan about, to be rid of oneself, to escape your own mind, to be free and the futility of all of this.

I’m very glad that you wrote to me “in the heat of the moment.” One gets a good, genuine reaction that way, and not something powdered over for public appearance. I remind myself of the remark attributed to a Chinese sage when one of his students left him for some months (or it may be years) and then returned: “Why this ceaseless coming and going?”

I am sorry to be so confusing. But of course there is no guarantee at all that what I say now has, for you, any more validity than what I said four years ago. If I may quote from the preface to The Supreme Identity: “I am not one of those who believes that it is any necessary virtue in the philosopher to spend his life defending a consistent position. It is surely a kind of spiritual pride to refrain from ‘thinking out loud,’ and to be unwilling to let a thesis appear in print until you are prepared to champion it to the death. Philosophy, like science, is a social function, for a man cannot think rightly alone, and the philosopher must publish his thought as much to learn from criticism as to contribute to the sum of wisdom.”

But the real point is that your own confused reaction is a rather marvellous object lesson in the very problem you say you do not understand — namely, this business of clinging to oneself. We think, don’t we, that we want to stop clinging and get rid of self in such “projected” and external forms as belief in God or in some spiritual teacher. Now God may exist, and the teacher may be right. But when we approach them in the self-clinging spirit we can’t understand them properly, and the belief achieves nothing.

To the extent that you, or I, make someone or something an authority to be followed, we are really fooling ourselves. For, the authority of the teacher is something that you give him. And you give it to him because you want an authority, that is, some kind of spiritual security for the self.

All right then: if we find that “believing” has merely been an indirect form of clinging to self, we want to know how to stop clinging, and insist, as you do, that we would love to be rid of self. Why would we? I don’t want to dictate the answer to this question. Look into your own mind honestly, and find out why you want to be rid of self. You could easily find out that you want to do so because you think you (i.e., your self ) will be happier that way. And then you get that frustrating “haven’t-we-been-here-before?” feeling, because the mind is just going round in a circle. The mind will always circle so long as it is under the illusion that it can make itself something other than what it is, so long as it imagines there is some trick whereby it can jump out of itself, or change its own nature.

But it is really easy to see the futility of all this if you are really aware of what you are doing. And when you see the real futility of this constant attempt to escape what you are, you have no alternative but to stop. When you stop, you can function properly. You can walk straight ahead, or flow along instead of whirling in small circles, instead of short-circuiting the spirit. At that point the state exists which the mystic calls “union with God” or “eternal life.” For that is the state of reality. Circling (samsara) is the state of illusion.

Here I am turning you round in circles again! Well, beware of me. I really think you will. Take me with the biggest grains of salt you can find. I do not talk or write to be followed, but to get you to look into your own mind and find out for yourself what the score is. I have no message, for the rose is red and doesn’t need painting.

I shall continue to write because it’s my nature. The Supreme Identity will be out in Sept., and represents an intermediate stage between Behold the Spirit and what I think now. What shall I think tomorrow? I don’t know. The whole fun of life is that it’s full of new surprises and new things to learn, provided you are willing to keep on growing and not settle into a rut.

I wish you a good adventure.
Most sincerely, Alan Watts

The second letter was written in response to an article on the desirability of abolishing death and I feel this captures Alan’s gift of cutting through the clutter with his usual chirpiness. And, in the process, articulating a timeless perspective on nothingness, on life and death.

For either Dear Playboy or the Forum.

Under the cover of lusty and curvaceous chicks (of whom I approve), and of silly bunnies (of whom I disapprove), you have turned Playboy into the most important philosophical periodical in this country. I am a little nervous about admitting this, but, by comparison, The Journal of the American Philosophical Society is pedantic, boring, and irrelevant. Your recent interviews with Marshall McLuhan and Allen Ginsberg, your articles by Romain Gary, Arthur Clarke, Justice William O. Douglas, Alan Harrington, and many others — all these are intellectual stimulation of the highest order. How on earth do you get away with it?

However, in an entirely friendly spirit, I would like to take issue with Alan Harrington’s fascinating article “The Immortalist” (May 1969), on the desirability of abolishing death, and the possibility of doing so through medical techniques.

The immortalization of any biological individual runs into the same logistic problems as building indefinitely high skyscrapers: the lower floors are increasingly taken up with channels for elevators. It’s called “the law of diminishing returns.” A brain that continues intact for 100, 500, or 1,000 years is increasingly clogged with memories, and becomes like a sheet of paper so covered with writing that no space is left for any visible or intelligible form. Thus a human being 500 years old would be as inert as a turtle of the same age.

Consider the following points: (a) Death is not a sickness or disease; it is an event as natural and as healthy as childbirth or as the falling of leaves in the autumn. (b) As the “natural childbirth” obstetricians are training women to experience the pains of labor as erotic tensions, there is no reason why the “pangs of death” should not be reinterpreted as the ecstasies of liberation from anxiety and overloads of memory and responsibility. (c) Suppose that medical science achieves a method of getting rid of the overload of memories and anxieties: Isn’t this what death accomplishes already? (d) The funk about death is the illusion that you are going to experience everlasting darkness and nothingness as if being buried alive. (e) The “nothingness” after death is the same as the “nothingness” before you were born, and because anything that has happened once can happen again you will happen again as you did before, mercifully freed from the boredom of an overloaded memory.

Along with most of us, Alan Harrington doesn’t see that this “nothingness” before birth and after death is simply the temporal equivalent of, say, the space between stars. Where would stars be without spatial intervals between them? The problem is simply that civilized and brainwashed human beings lack the perception that we are all one Self, marvellously varied and indefinitely extended through time and space with restful intervals. As St. Thomas Aquinas said, “It is the silent pause which gives sweetness to the chant.”

Instead of trying to turn us into living mummies, the medical profession would be better advised to reform the present morbid rituals of dying in hospitals and turn them into celebrations in which the patient is encouraged to let go of himself by cooperating with death. You only die once, and why not make the best of it?

Thank you to the publisher, New World Library, for giving us permission to publish these excerpts from the book. You can pickup a copy of “The Collected Letters Of Alan Watts” here. 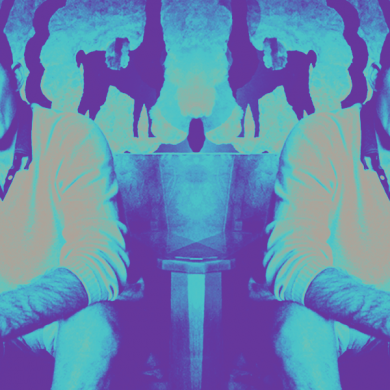 Profound letter from Hunter S. Thompson on the meaning of life