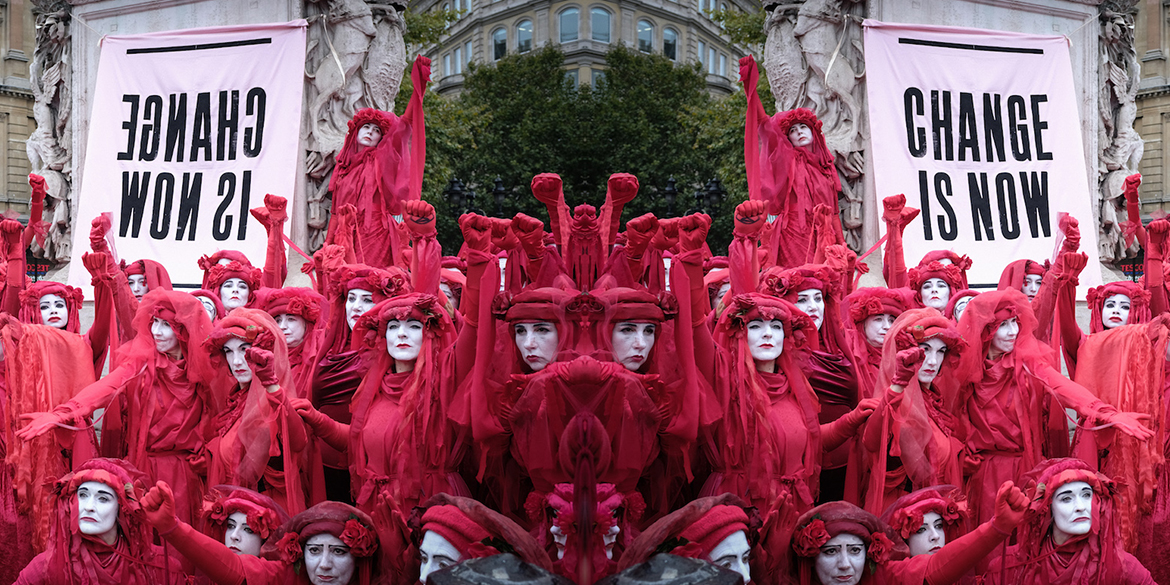 The Earth Is in a Death Spiral. It Will Take Radical Action to Save Us

It was a moment of the kind that changes lives. At a press conference held by climate activists Extinction Rebellion last week, two of us journalists pressed the organisers on whether their aims were realistic. They have called, for example, for UK carbon emissions to be reduced to net zero by 2025. Wouldn’t it be better, we asked, to pursue some intermediate aims?

A young woman called Lizia Woolf stepped forward. She hadn’t spoken before, but the passion, grief and fury of her response was utterly compelling. “What is it that you are asking me as a 20-year-old to face and to accept about my future and my life? … This is an emergency. We are facing extinction. When you ask questions like that, what is it you want me to feel?” We had no answer.

Hopeless realism, tinkering at the edges of the problem, got us into this mess. It will not get us out.

Softer aims might be politically realistic, but they are physically unrealistic. Only shifts commensurate with the scale of our existential crises have any prospect of averting them. Hopeless realism, tinkering at the edges of the problem, got us into this mess. It will not get us out.

Public figures talk and act as if environmental change will be linear and gradual. But the Earth’s systems are highly complex, and complex systems do not respond to pressure in linear ways. When these systems interact (because the world’s atmosphere, oceans, land surface and lifeforms do not sit placidly within the boxes that make study more convenient), their reactions to change become highly unpredictable. Small perturbations can ramify wildly. Tipping points are likely to remain invisible until we have passed them. We could see changes of state so abrupt and profound that no continuity can be safely assumed.

Only one of the many life support systems on which we depend — soils, aquifers, rainfall, ice, the pattern of winds and currents, pollinators, biological abundance and diversity — need fail for everything to slide. For example, when Arctic sea ice melts beyond a certain point, the positive feedbacks this triggers (such as darker water absorbing more heat, melting permafrost releasing methane, shifts in the polar vortex) could render runaway climate breakdown unstoppable. When the Younger Dryas period ended 11,600 years ago, temperatures rose 10C within a decade.

I don’t believe such a collapse is yet inevitable, or that a commensurate response is either technically or economically impossible. When the US joined the second world war in 1941, it replaced a civilian economy with a military economy within months. As Jack Doyle records in his book Taken for a Ride, “In one year, General Motors developed, tooled and completely built from scratch 1,000 Avenger and 1,000 Wildcat aircraft … Barely a year after Pontiac received a navy contract to build anti-shipping missiles, the company began delivering the completed product to carrier squadrons around the world.” And this was before advanced information technology made everything faster.

The problem is political. A fascinating analysis by the social science professor Kevin MacKay contends that oligarchy has been a more fundamental cause of the collapse of civilisations than social complexity or energy demand. Control by oligarchs, he argues, thwarts rational decision-making, because the short-term interests of the elite are radically different to the long-term interests of society. This explains why past civilisations have collapsed “despite possessing the cultural and technological know-how needed to resolve their crises”. Economic elites, which benefit from social dysfunction, block the necessary solutions.

The oligarchic control of wealth, politics, media and public discourse explains the comprehensive institutional failure now pushing us towards disaster.

The oligarchic control of wealth, politics, media and public discourse explains the comprehensive institutional failure now pushing us towards disaster. Think of Donald Trump and his cabinet of multi-millionaires; the influence of the Koch brothers in funding rightwing organisations; the Murdoch empire and its massive contribution to climate science denial; or the oil and motor companies whose lobbying prevents a faster shift to new technologies.

It is not just governments that have failed to respond, though they have failed spectacularly. Public sector broadcasters have systematically shut down environmental coverage, while allowing the opaquely funded lobbyists that masquerade as thinktanks to shape public discourse and deny what we face. Academics, afraid to upset their funders and colleagues, have bitten their lips.

…continued economic growth is incompatible with sustaining the Earth’s systems.

Even the bodies that claim to be addressing our predicament remain locked within destructive frameworks. Last Wednesday I attended a meeting about environmental breakdown at the Institute for Public Policy Research. Many people in the room seemed to understand that continued economic growth is incompatible with sustaining the Earth’s systems.

As the author Jason Hickel points out, a decoupling of rising GDP from global resource use has not happened and will not happen. While 50bn tonnes of resources used per year is roughly the limit the Earth’s systems can tolerate, the world is already consuming 70bn tonnes. At current rates of economic growth, this will rise to 180bn tonnes by 2050. Maximum resource efficiency, coupled with massive carbon taxes, would reduce this at best to 95bn tonnes: still way beyond environmental limits. Green growth, as members of the institute appear to accept, is physically impossible.

The world is already consuming 70bn tonnes (of resources).

Yet on the same day, the same institute announced a major new economics prize for “ambitious proposals to achieve a step-change improvement in the growth rate”. It wants ideas that will enable economic growth rates in the UK at least to double. The announcement was accompanied by the usual blah about sustainability, but none of the judges of the prize has a discernible record of environmental interest.

Those to whom we look for solutions trundle on as if nothing has changed. As if the accumulating evidence has no purchase on their minds. Decades of institutional failure ensures that only “unrealistic” proposals — the repurposing of economic life, with immediate effect — now have a realistic chance of stopping the planetary death spiral. And only those who stand outside the failed institutions can lead this effort.

Both tasks require a complete revision of our relationship with the living planet.

Two tasks need to be performed simultaneously: throwing ourselves at the possibility of averting collapse, as Extinction Rebellion is doing, slight though this possibility may appear; and preparing ourselves for the likely failure of these efforts, terrifying as this prospect is. Both tasks require a complete revision of our relationship with the living planet.