The Silver Lining to a Global Economic Meltdown — Daniel Pinchbeck

An opinion piece from Daniel Pinchbeck.

The economic collapse caused by the pandemic is perhaps the best thing that could happen to humanity right now, despite the short-term misery it will cause for many.

We know if we continue business as usual we will soon drive ourselves to extinction. Europe was 1.4 degrees Celsius warmer this winter then ever before – a massive jump suggesting we are seeing a rapid spike in warming. A billion animals perished in Australian wildfires last summer. Arctic temperatures skyrocketed. The shutdown of the world financial system is what we need for the Earth to begin recovering from our ongoing onslaught.

The global financial meltdown provides us with a great opportunity to design and launch a new social operating system. It seems like, in the near-term, governments are going to be forced into some kind of Neo-socialism, even Right Wing ones. Right now we have corporate socialism that protects the rich from risk.

For instance, the Fed just created $1.5 trillion imaginary dollars and gave it to the financial sector. Soon other industries will have to be bailed out, such as airlines. But what about all the restaurant workers, freelancers, storekeepers who survive from paycheck to paycheck? All of those who have to keep paying mortgages or student debts? Either governments are going to behave with utter cruelty and disregard, or they are going to have to extend credit to nearly everyone affected – or even just take over the job of making food and housing available for those in need.

This crisis will lead many people to question the basis of the financial system itself. The political philosopher Antonio Negri defined capital as, ultimately, a “social relation.” This is a crucial realization. As Marx noted, Capitalism substituted an illusory “sense of having” for immediate presence or being.

The wealth possessed by a billionaire is made up of digital numerals swirling in the virtual reality of the markets, protected by agreed-upon legal codes. Ultimately, finance capital is a mental construct that we have reified through our institutions. We protect this fictional fortress with police and military.

A central purpose of government is to safeguard the financial system, which maintains the historical, hierarchical structure of class, gender, and racial oppression / inequality. Government, itself, is an ongoing negotiation between the “rulers” and the “ruled.” The rulers – the financial elite and other contemporary versions of aristocracy like the Silicon Valley crowd – always game the system for their advantage. Sometimes their greed causes the system to collapse.

It seemed like we were tilting toward some kind of collapse before the crisis, but now that we have reached a truly existential circumstance, a more profound restructuring could occur. What would that look like?

We have to ask ourselves what is the true nature of value. What does our system currently value, and what do we need to value instead? We need, effectively, a polar reversal, where instead of valuing short-term financial gain, we value preserving and restoring the planetary ecosystems and we penalize activities that impact the biosphere negatively. There is no reason a new form of “currency” couldn’t reflect these new priorities.

But what would be the social mechanism for reaching a new consensus around this? How could a new system for exchanging value be developed in a hurry? I thought this was the initial promise of Blockchain: To provide an infrastructure for new means of exchanging value and building “People Power.” But much of the Blockchain community was entranced by self-serving Libertarianism. Libertarian ideology is getting dismantled by the current pandemic, as it proves the need for collective action and planetary community.

This crisis is most definitely an amazing opportunity – perhaps the last. 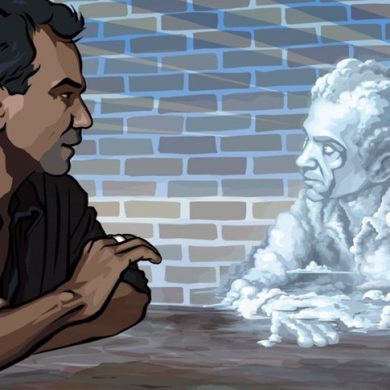