What is Cosmic Consciousness? The 5 Main Signals of Awakened Beings

Summary
In 1901 Canadian psychiatrist Richard M. Bucke gathered 36 examples of people he believed had attained “cosmic consciousness,” including historical figures, such as the Buddha, Moses, Jesus and Dante. Bucke identified the 5 main characteristics of cosmic consciousness which we outline in this excerpt from Steve Taylor’s new book The Leap: The Psychology of Awakening.

To my knowledge, the first ever psychological study of what I call “wakefulness”—a higher-functioning expansive state of being—was conducted by Canadian psychiatrist Richard M. Bucke and published as Cosmic Consciousness: A Study in the Evolution of the Human Mind in 1901. Bucke gathered 36 examples of people he believed had attained “cosmic consciousness,” including historical figures, such as the Buddha, Moses, Jesus, Dante, and 18th-century Swedish philosopher Emanuel Swedenborg, and a number of contemporaries, some of whom he knew personally.

The main characteristics of cosmic consciousness as identified by Bucke are:

Bucke also highlights the importance of light. Cosmic consciousness may feature an experience of being “immersed in a flame or rose-colored cloud, or perhaps rather a sense that the mind is itself filled with such a cloud or haze.”

Bucke’s interest in cosmic consciousness was partly inspired by the poet Walt Whitman—initially by his poetry and then by his personal encounters with Whitman. Bucke not only included Whitman in his book as an example of cosmic consciousness but also regarded him as the “highest instance of Cosmic Consciousness” (above the Buddha and Jesus!). In Bucke’s view, Whitman was able to integrate his mystical consciousness into his ordinary personality without allowing it to take over and “tyrannize over the rest.” This meant that he could live in a completely ordinary way, interacting with ordinary people in everyday life, rather than become otherworldly and detached, and live as a monk or hermit.

Although the details of his early life are sketchy, there are no signs that Whitman attained his wakefulness at a specific point in time. Sudden awakening is often triggered by a period of intense psychological turmoil (as I show in my book Out of the Darkness), but there’s no evidence that Whitman went through such turmoil in his early life. Whitman’s wakefulness was also not generated by prolonged and regular spiritual practice or by following a particular spiritual tradition. Eastern spiritual traditions and practices were little known in the United States during Whitman’s early years—he was born in 1819. In his later years, Whitman developed some familiarity with Indian philosophy but not any deep or detailed knowledge. (For example, when his contemporary Henry David Thoreau first read Whitman’s Leaves of Grass, he was deeply impressed and said it was “wonderfully like the orientals.” Thoreau asked Whitman if he had read oriental works, and he replied, “No, tell me about them.”) Rather, Whitman’s wakefulness seems to have been completely organic and spontaneous, a state that was wholly natural to him.

Whitman lived in a state of heightened awareness. To him, the world was a fantastically real, beautiful, and fascinating place. As Bucke writes of him:

“His favourite occupation seemed to be strolling or sauntering about outdoors by himself, looking at the grass, the trees, the flowers, the vistas of light, the varying aspects of the sky, and listening to the birds, the crickets, the tree frogs, and all the hundreds of natural sounds. It was evident that these things gave him a pleasure far beyond what they give to ordinary people.”

With this heightened awareness, Whitman sensed the sacred aliveness of the world and the radiance and harmony of a spirit-force pervading every object and creature. The whole world was divine, including his own being and body. As he writes in the poem “Song of Myself”:

Divine am I inside and out, and I make holy whatever I touch…
I see something of God each hour of the twenty-four, and
each moment then,
In the faces of the men and women I see God, and I my own
face in the glass.

As well as bringing an intense sense of the is-ness of things, the heightened awareness of the wakeful state brings an intense sense of now-ness. Our present-tense experience—our awareness of our surroundings, perceptions, and sensations—becomes so powerful that we give complete attention to it. The past and future become completely unimportant as we realize that there’s only now, that life can only ever take place in the present moment. As a result, the whole concept of time becomes meaningless. Life is no longer a road with directions forward and backward; instead, it becomes a spacious panorama without movement or sequence. In Whitman’s words, “The past and present wilt—I have filled them, emptied them.” And here he describes his intense experience of nowness:

Whitman’s awareness of a spirit-force pervading everything meant that to him there were no separate or independent phenomena. To him, all things were part of a greater unity. In his poem “On the Beach at Night, Alone,” for example, he describes his awareness that all things are part of a “vast similitude.” All suns, planets, human beings, animals, plants, all of the future and the past, and all of space are essentially one and the same:

This vast similitude spans them, and always has spann’d,
and shall forever span them, and compactly hold them, and enclose them.

Whitman sensed himself as a part of this “vast similitude,” too. He felt such a strong connection between himself and other people that he shared his being with them; he felt that he actually was them. He writes, “I am of old and young, of the foolish as much as the wise,” and “all the men ever born are my brothers … and the women my sisters and lovers.”

Interestingly, as well as being recognized by Bucke as an example of cosmic consciousness, Whitman is highlighted by the psychologist Abraham Maslow as an example of what he calls the “self-actualized person.” One of their most pronounced characteristics, according to Maslow, is a powerful sense of appreciation and gratitude.

As Maslow writes, self-actualized people “have the wonderful capacity to appreciate again and again, freshly and naively, the basic goods of life, with awe, pleasure, wonder and even ecstasy, however stale these experiences may have become to others.”

This was certainly true of Walt Whitman. When we hear the word miracle we usually think in terms of extraordinary feats such as healing incurable diseases or turning water into wine. But in the wakeful state, we don’t need to look outside the normal realm of things for miracles. Miracles are everywhere around us. The everyday world becomes strange and miraculous. As Whitman writes, “Who makes much of a miracle? As for me I know nothing but miracles.” It’s wonderful that he should be immortal, he writes, but “my eyesight is equally wonderful, and how I was conceived in my mother’s womb is equally wonderful.” But as far as he’s concerned, nothing is more miraculous than he himself: “Seeing, hearing, feeling, are miracles, and each part and tag of me is a miracle.”

Whitman’s joyous celebration of life by no means meant ignoring death. On the contrary, the subject of death crops up again and again throughout his poems, right from the first pages of “Song of Myself” (where he says that it is “just as lucky to die” as it is to be born). Whitman sensed very powerfully that rather than be the end of our existence, death is actually a kind of liberation, a transition to a fuller and more blissful state. Like his fellow poet William Wordsworth sensing “intimations of immortality,” Whitman heard “whispers of heavenly death” everywhere around him. In a moving short poem, “To One Shortly to Die,” Whitman describes visiting a friend on his deathbed. The bed is surrounded by weeping relatives, but as Whitman rests his hand on his friend he senses that he is preparing to leave his body and beginning to transcend his pain. It’s not a time for sadness but for joy:

Steve Taylor PhD is a senior lecturer in psychology at Leeds Beckett University, UK. This article is an excerpt from his new book The Leap: The Psychology of Awakening. 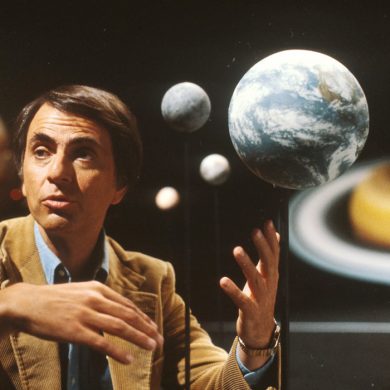